HISTORY AND ORIGINS OF THE RAGDOLL BREED
THE MYSTERY

The story begins in the 1960’s, Ann Baker who lived in Riverside, California discovered this breed, she was the first owner of Ragdoll cats and founded the first association in the world of this breed.

The mother of all Ragdolls was a family pet named Josephine. She was a white cat with a medium length coat who belonged to Anne Baker’s neighbour Mrs Pennels.

Josephine usually lived in a semi-wild state until she was involved in a car accident. After the serious accident Josephine was cared for by another two neighbours who worked at the university nearby. The treatment was long and complicated but Josephine recovered.

Ann Baker noticed that the first litter after the accident was very different from previous litters. While the kittens born before the accident wild and diffident, those born after were completely different !  they were trusting, non-aggressive and they all had the same strange characteristic : when they were held, their muscles relaxed totally and they became completely relaxed, just  like a ‘ragdoll’.

From that moment on, different theories began, which were more or less true, about the gentle character of this breed and of its unique ability to relax its muscles completely.

It is said that after the accident Josephine was treated with experimental drugs by the two scientists who looked after her.

Today, scientists maintain that in the 1960’s drugs capable of causing genetic mutations did not exist. The mutation may have taken place by pure chance.

Another theory is that during the accident Josephine’s reproductive cells were damaged due to trauma.

Today according to scientists it is clear that the total relaxation of the muscles is caused by more than one gene and therefore the theory is very improbable.

Other theories, often very far-fetched talked about how Ann Baker over time become completely obsessed by these cats.

So, what are the scientific facts ? up to now scientist have been cautious and reluctant to talk about the genetics of the Ragdoll.

The only certain information is that up to now there has never been a genetic make-up like this and that it is absolutely new.

At the time , everyone noticed that the kittens were unusual, different from kittens of all other feline breeds.

For this reason Ann Baker decided to create a totally new breed with a particularly gentle character , unique in the whole world.  In an attempt to promote the Ragdoll breed, she even claimed that it was immune to pain. Nothing could be more wrong, Ragdolls feel pain exactly like all other cats but being particularly gentle and relaxed they tolerate pain in silence and with great dignity.

The first cat owned by Ann Baker was a black female called Buckwheat , similar to a Burmese cat.

The second was called Raggedy Ann Fugianna (Raggedy Ann is the name of Ann Baker’s breeding centre). The father of Fugianna was the male Daddy Warbucks who belonged to Ann Bakers neighbours Mrs Pennels.  He had typical Burmese socks and was the son of Josephine. All of these cats were Josephine’s kittens from various different fathers.

Ann Baker was enchanted by Daddy who looked very like a Burmese cat and proclaimed that he was ‘the father of all Ragdolls’ and would borrow him from Mrs Pennels for the breeding programme.

Unfortunately Josephine did not give Mrs Baker other litters, because her husband who was tired and irritated by all the chaos and notoriety created around the Ragdoll breed euthanized  Josephine and her new litter.

At this point Ann Baker took it upon herself to promote the breed and in short the media of the whole world was soon talking about it.

Ann Baker called the new breed Ragdoll and patented the name. Whoever wished to start breeding these cats was forced to sign a limiting and binding contract.

Ann Baker also founded the International Ragdoll cat association (IRCA) which was not linked to other feline organisations.

Ann Baker’s restrictive policy led to a division between the supporters of the breed , Ann Baker underlined the fact that the Ragdoll has no sense of danger and this caused difficulties with the professional breeders who did not want to recognise a breed which is not capable of naturally defending itself. In truth however it has been noted that although the Ragdoll is not especially aware of danger it does posses a good instinct and well-developed intelligence. These cats are appreciated for their quite but well balanced characters.

Today there are still those who are against this breed , convinced that it is an animal which would not be able to survive in the wild and should not therefore be bred.

Telling the story of the Ragdoll, it is worth mentioning Laura and Danny Deyton, who managed to own these cats before Ann Baker began her restriction on the breeding o these animals.

They have been proclaimed as the precursors of the true breeders and founders of the Ragdoll Fanciers Club International (RFCI)founded in 1971.

In 1981 the first Ragdolls arrived in Europe.

Ann Baker died in 1997,  feeling betrayed and deceived by the Ragdoll breeders. 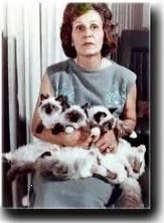 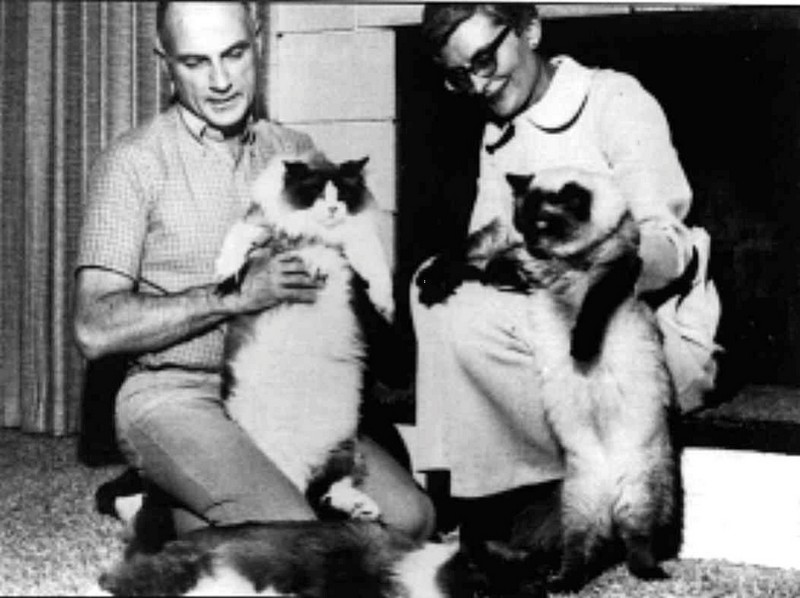 The name ‘Ragdoll’ ideally reflects its character and its basic characteristics. When you pick it up it automatically relaxed all its muscles and becomes floppy.

Another characteristic which distinguishes it from all other breeds of felines is its enormous trust in its owner, whether child, adult or elderly person and its unconditional love and affection towards its human ‘parents’. It has no problems travelling or moving house as long as it can continually follow its human companions.

It adores physical contact with humans and can never get enough cuddles . Ragdolls want to be considered as members of the family and not just cats. It takes part in family life and follows the family around from room to room, even to the bathroom ! So there is no privacy with a Ragdoll.

The Ragdoll is a calm and well balanced cat but never phlegmatic. It is not an agile tiger and thus does not enjoy acrobatic jumps, climbing on furniture or climbing up curtains instead it much prefers to keep its feet on the ground.

Its lack of aggression and reactivity means that it can live happily with other animals and children, in fact it is with children or the elderly that it manages to have a very close relationship.

All these characteristics make it absolutely unique and not comparable to any other feline breeds.

Its lack of aggression , gentle and trusting nature and its love of humans as well as its intelligence and the ease with which it can be trained, make the Ragdoll the only breed of cat in the world used for pet therapy. Its work has been valuable with people of all ages with psychological and social problems.

It is vital, however that during play with our Ragdoll it is monitored so that nothing happens to it due to its temperament and trusting nature it is practically unable to defend itself.

Due to its lack of aggression it must never be left alone outside. It would never be able to defend itself from attacks by other animals or people.

The Ragdoll is a  typical house cat which does not require a lot of room, it is more interested in having company and not large spaces.

the Ragdolls constant need for contact and attention from its owner means that it should never be left at home alone for any length of time, over time the Ragdoll can become depressed and this can have repercussions on its well-being.

Therefore it is very important if the owner is away from home for several hours each day and there are not other people or animals in the house, to have two kittens together. They can keep each other company and stay happy and healthy. It is said that Ragdolls should be kept in twos .

The Ragdolls voice is like a baby crying or the call of a bird, it is a very quiet cat and like other cats does not enjoy chaos or noise.

The Ragdoll wants to be accepted as one of the family, an eternal kitten who even when fully grown always wants to play ans seeks attention from its owners, its best plymate is always its owner.

This unique and unusual character is described very well in the saying : 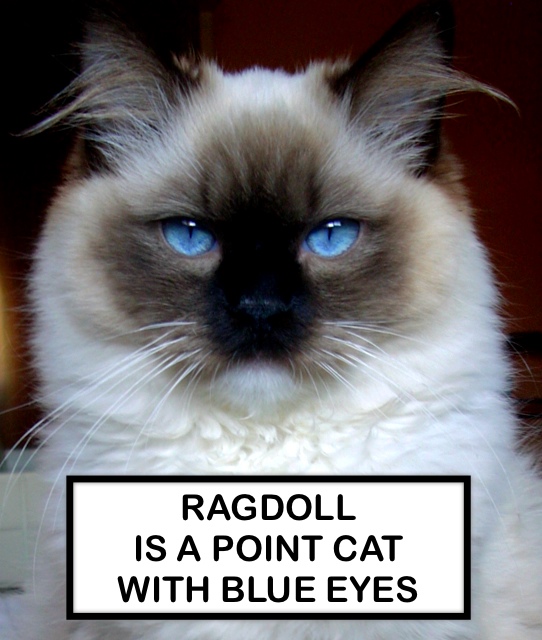 The Ragdoll is a powerful, solid cat second only in size in the world to the Mainecoon.

The female weighs from 4 to 6 kgs the male 6 to 9 kgs. Those animals which are neutered may weigh more.

It is a cat with a semi long coat, thick, soft and silky with very little undercoat. Longer on the back, thighs and around the neck where it forms a ‘ruff’ of fur.

The Ragdoll like most other long haired, or semi-long haired cats develop very slowly maturing at about 3 to 4 years of age.

The kittens are completley white at birth and it is only possible to see what variety each kitten will be after two weeks.

The colour of the fur darkens over time and will only become definitive when the animal is fully grown (3-4 years).

However, generally the basic characteristics can be described, taking into consideration that an ideal Ragdoll does not exist. As you move further towards the standard of the breed so you move towards the ideal of the breed.

The Ragdoll exists in three varieties : POINT, MITTED, BICOULOUR and in colours which are typical to each variety.

There is also the TABBY (LYNX) pattern . In the tabby variation the colours have a striped look which changes accoriding to the variety of Ragdoll.

There is also the TORTIE pattern : the colours Seal, Red or Cream mixed with one of the other colours, Blue, Chocolate or Lilac.

Finally there is the TORBIE pattern : which is Tortie plus the Tabby (Lynx) pattern.

Mask, ears, paws and tail are noticeably darker than the rest of body. 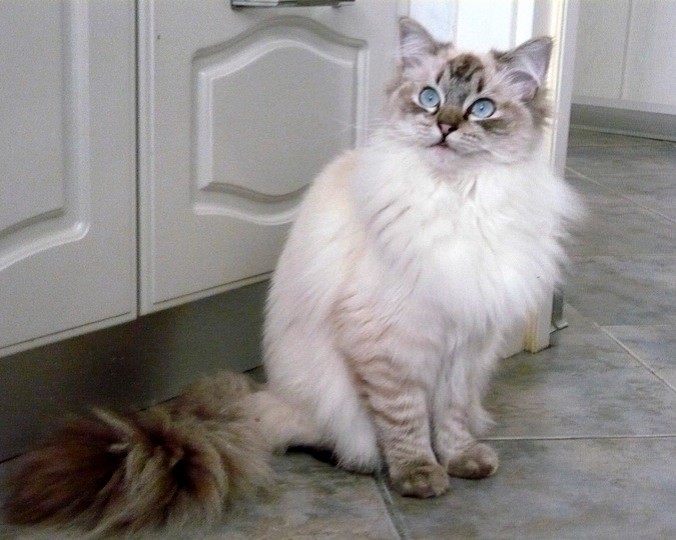 The Ragdoll has a minimum of half to a maxiumum of ¾ the body surface of a darker colour, the rest is white. Ears, mask and tail are noticeably darker than the rest of body. There is a characteristic upside down ‘V’ on the mask. The body is slightly lighter with or without white patches on the back. It has a white belly without marks, the paws are preferably white and the nose pink.

Photo by courtesy of www.ragissa.eu 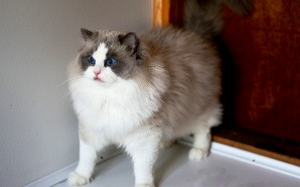 White chin with or without vertical white stripe on the mask called the ‘blaze’. White socks on front paws, white boots on back paws. A long white stripe which goes from the chin, under the belly and ends at the tail.

Pink pads. Colour of nose corresponds to colour of coat.

Photo by courtesy of www.ragissa.eu 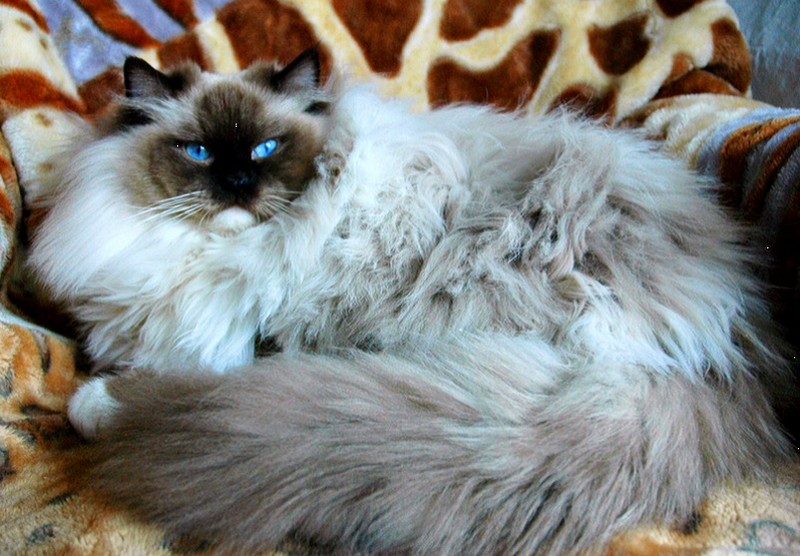 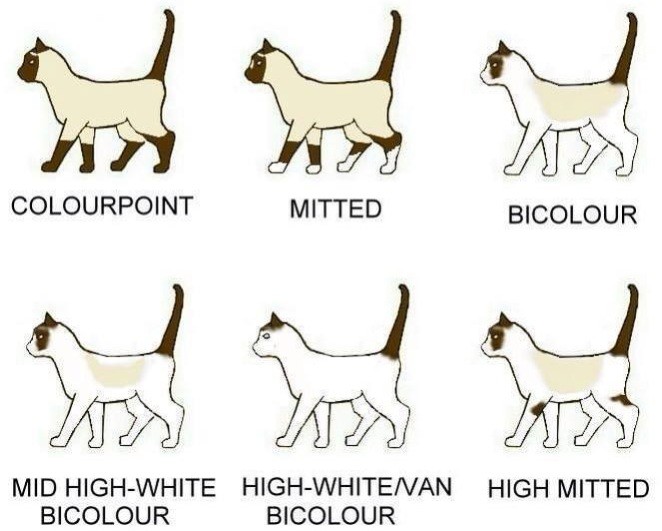